Recently, we introduced the notion of transactionally-reactive programming - consistent propagation of changes from data layer to visual components.

This article is focused on the transactionally-reactive state management in a browser-based Web application. The described concepts are implemented in the open-source JavaScript library, called Reactronic.

Transactional reactivity is based on the three fundamental concepts:

The following picture illustrates relationships between the concepts in the source code: 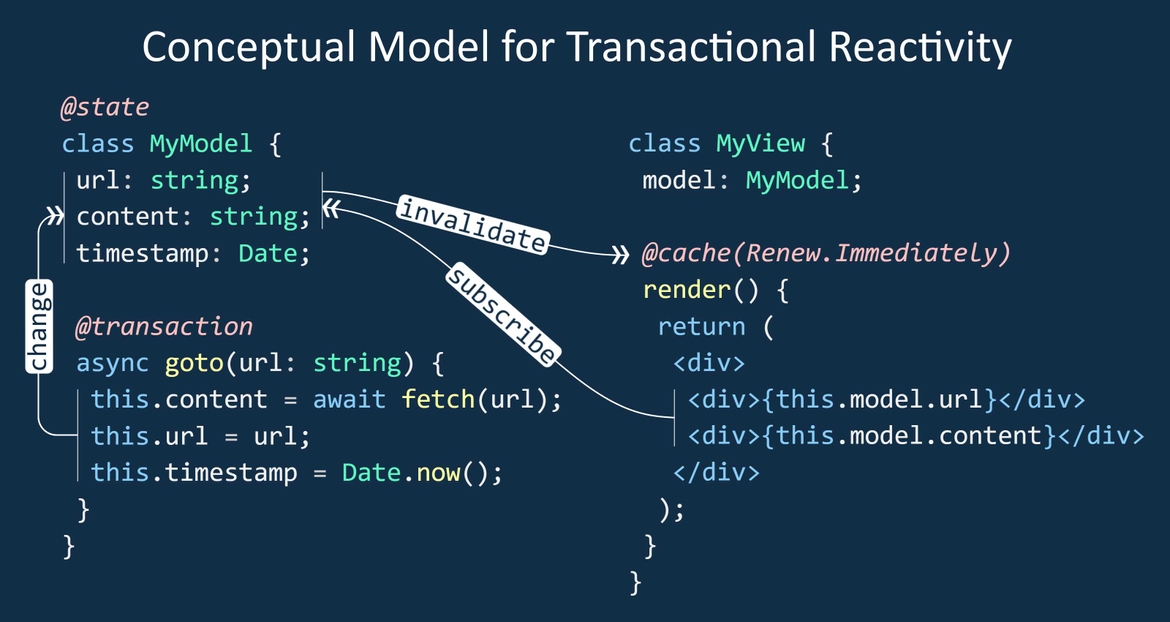 Below is the detailed description of each concept.

State is a set of objects that store data of an application. All state objects are transparently hooked to track access to their properties, both on reads and writes.

In the example above, the class MyModel is instrumented with the @state decorator and its properties url, content, and timestamp are hooked.

Transaction is a function that changes state objects in an atomic way. Every transaction function is instrumented with hooks to provide transparent atomicity (by implicit context switching and isolation).

Atomicity is achieved by making changes in an isolated data snapshot that is visible outside of the transaction (e.g. displayed on user screen) only when it is finished. Multiple objects and their properties can be changed with full respect to the all-or-nothing principle. To do so, separate data snapshot is automatically maintained for each transaction. That is a logical snapshot that does not create a full copy of all the data.

Compensating actions are not needed in case of the transaction failure, because all the changes made by the transaction in its logical snapshot are simply discarded. In case the transaction is successfully committed, affected caches are invalidated and corresponding caching functions are re-executed in a proper order (but only when all the data changes are fully applied).

Cache is a computed value having an associated function that is automatically called to renew the cache in response to state changes. Each cache function is instrumented with hooks to transparently subscribe it to those state object properties and other caches, which it uses during execution.

Reactronic takes full care of tracking dependencies between all the state objects and caches (observers and observables). With Reactronic, you no longer need to create data change events in one set of objects, subscribe to these events in other objects, and manually maintain switching from the previous state to a new one.

Each cache has latency - a delay between cache invalidation and invocation of the caching function to renew the cache. Possible values are:

Feel free to try it yourself or contribute at GitHub.

Or try it as an NPM package: npm i reactronic.

Negrep is a free Nevod based grep

Nezaboodka™ is now an official trademark

The Future of Big Data Analytics is an Excel-Like Spreadsheet

Nevod Technology is in the Top of Hacker News at Y Combinator!

Nezaboodka has become a resident of Belarus High-Tech Park

Nezaboodka has applied for an NLP patent